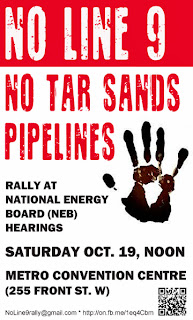 Without even an environmental assessment, oil giant Enbridge wants to use a 38-year old pipeline to pump toxic tar sands through the most populated corridor in the country, promoting the tar sands and contributing to climate change. As Toronto enters a two week calendar of events for environmental justice, culminating in a rally on October 19, here are 9 reasons to stop Line 9.

2) reduce climate change
As former NASA climatologist James Hansen has warned, “If humanity wishes to preserve a planet similar that on which civilization developed and to which life on Earth is adapted, paleoclimate evidence and ongoing climate change suggest that CO2 will need to be reduced ... to at most 350 ppm.” This year, for the first time in human history, atmospheric concentrations of CO2 reached 400ppm. In this context we’re seeing increasing climate disasters—from hurricane Sandy to epic floods in Alberta and Toronto.

According to a Canadian scientist and coordinating author of the recently released IPCC report, “evidence for a warming climate is getting stronger and stronger, and the evidence of the influence of human activities on that climate change is getting stronger and stronger…Climate change and warming in particular is amplified—that is, it’s larger—at higher latitudes. So warming over Canada is larger than the warming that has been experienced [worldwide] and it is projected to continue that way. That warming over Canada will continue to be more rapid than the global [average] warming.”

The tar sands are Canada’s fastest growing source of carbon emissions, and both its local and global affects disproportionately affect communities impacted by poverty and racism. Stopping Line 9 and other tar sands pipelines is critical to reduce climate change.

3) prevent oil spills
Pipeline spills happen all the time--including Enbridge’s Line 6B that spilled 3 million litres into the Kalamazoo River in 2010, the spill of millions of litres in Lubicon territory in 2011, the spill last March in a residential neighbourhood in Arkansas, and the spill this June in Alberta from Enbridge’s Line 37. As an Arkansas resident said: “I didn’t even know the oil pipeline was there…she called me and said, ‘Honey, something’s wrong.’ I came out and smelled it. Then I saw it coming down the street.”

This is what’s in store for communities along the Line 9 route. According to the city of Toronto’s submission to the National Energy Board, “Neither the TTC, Toronto Fire Services nor Enbridge appear to have any specific contingency plan to manage a leak of petroleum should this occur near the TTC entrances…The top stair of the Bishop Avenue stairwell is at grade and provides no barrier to the flow of the product should there be a release. If any petroleum product was discharged either down the stairs or the escalators, or by other routes into the TTC concourse, platform or track level, there would be an enormous risk to thousands of daily passengers and TTC workers.”

These bitumen spills can’t just be “cleaned up”: some components evaporate and poison the air, while others sink and poison the earth and water. Three years and a billion dollars in clean-up fees later, and the Kalamazoo River is still contaminated. We need to stop Line 9 before it spills.

4) protect water
Massive amounts of water are wasted in tar sands production, which then contaminates the local water while pipelines threatens distant water. In the words of Toronto city counselor Anthony Perruzza: “The City of Toronto sits at one of the biggest freshwater supplies in the world. These pipelines cross the city, traverse it completely. Any leakage, any rupture, any break, any undetected leaks over time will have disastrous consequences for us and for our water.” With the pipeline running down Finch avenue--and not Bay Street or wealthy neighbourhoods in Toronto--oil spills would add to the poverty and racism already imposed on these communities. The best way to prevent these disastrous consequences is to stop the pipeline.

5) promote health
Tar sands and the oil industry is harmful to our health. Fort Chipewyan, downstream of the tar sands, is experiencing higher cancer rates. The working conditions in Fort McMurray contribute to an array of social costs, including the exploitation of migrant workers, and increased rates of suicide, addiction and abuse; a few years ago the director of Fort McMurray’s only woman’s shelter went on hunger strike to demand more resources. Pollution from oil and other petrochemical companies in Chemical Valley undermine health in Aamjiwnaang First Nation and Sarnia. According to the World Health Organization, “Climatic changes already are estimated to cause over 150,000 deaths annually… The risks are concentrated in the poorest populations, who have contributed the least to the problem of greenhouse gas emissions.” Stopping Line 9 would be a small but concrete step towards reversing the health impacts of the oil economy.

6) rebuild democracy
There has been no free, prior and informed consent from First Nations for Line 9, or the tar sands. Harper has undermined environmental regulation, there has been no environmental assessment for Line 9, and Enbridge has given “donations” to municipalities along the route (including the Hamilton police, who arrested line 9 protesters for occupying a pumping station). The National Energy Board (an “ally” of the Harper government) has monopolized decision-making power, excluded people from contributing to hearings, and tried to divide the movement between those they allow to intervene and those they do not allow. Challenging Line 9 exposes these attacks on democracy, as part of a movement to rebuild democracy.

7) support indigenous sovereignty
As IEN states, “Just a few years ago, people in Canada, U.S. and Europe heard little to nothing about the Canadian tar sands. Today, the tar sands have become a topic of national and international discussion as stories of cancer epidemics in the community of Fort Chipewyan, massive wildlife losses related to toxic contamination, environmental degradation and increased vocal resistance from impacted communities have shattered the ‘everything is fine’ myth propagated by the Canadian and Alberta governments.”

From declaration of unity against pipelines to Healing Walks, from freedom train to speaking tour, indigenous communities are leading the movement against tar sands, and providing an environmental justice framework to understand the threat of tar sands and the importance of indigenous sovereignty and solidarity.

8) demand green jobs
The billion dollars in subsidies to the tar sands each year could provide thousands of green jobs, and the climate justice movement includes labour activists pushing for a just transition from the oil economy to one based on sustainability. Last year unions endorsed a sit-in against tar sands pipelines and tankers, and this year the Steelworkers Toronto Area Council has endorsed the rally against Line 9 and provided funding for First Nations activists to bus into Toronto to join the rally. As a CAW organizer said last year, “tens of thousands of unionized and other jobs depend on healthy river and ocean ecosystems. We will be standing in solidarity with thousands of working people in BC and our First Nations sisters and brothers.” Line 9 will only produce a few temporary jobs in an industry that exposes workers to chemicals while undermining the environment on which future jobs depend. Stopping Line 9 is part of a movement demanding good green jobs for all.

9) build the environmental justice movement
Last October 22 there was a mass sit-in in Victoria, led by Coastal First Nations with participation from environmental groups and unions. On February 17 there was a huge protest outside White House against the Keystone XL pipeline. These movements are creating major barriers to pipelines going west and south, and there is a similar movement emerging against Line 9, from Aamjiwnaang to Montreal. During the next two weeks in Toronto there is a series of events leading up to the National Energy Board hearings, where people will be intervening against Line 9 in the hearings and in the streets. Join the movement!

*Tuesday October 15: Do The Math movie screening and panel discussion, by Toronto350, 5:45pm and 8:15pm at Bloor Hot Docs Cinema

Tar Sands Reality Check Tour, 6pm at Bloor Street United Church
NO LINE 9! NO TAR SANDS PIPE LINES, rally at noon outside the NEB hearings (Metro Convention Centre, 255 Front Street). “Indigenous communities, environmentalists and labour groups have united to oppose the tar sands pipelines going west and south, and we need a similarly impressive display of mass opposition to any such proposal to transport tar sands east. Stopping the Line 9 Pipeline Reversal and moving toward a clean energy economy with green jobs would be a multiple “win” – a win for communities, jobs, farms, the environment, public health, and for our long-term energy security. Join us October 19th outside the NEB hearings as we say No Line 9! No Tar Sands Pipelines!”
Posted by Dr. J at 11:05 AM