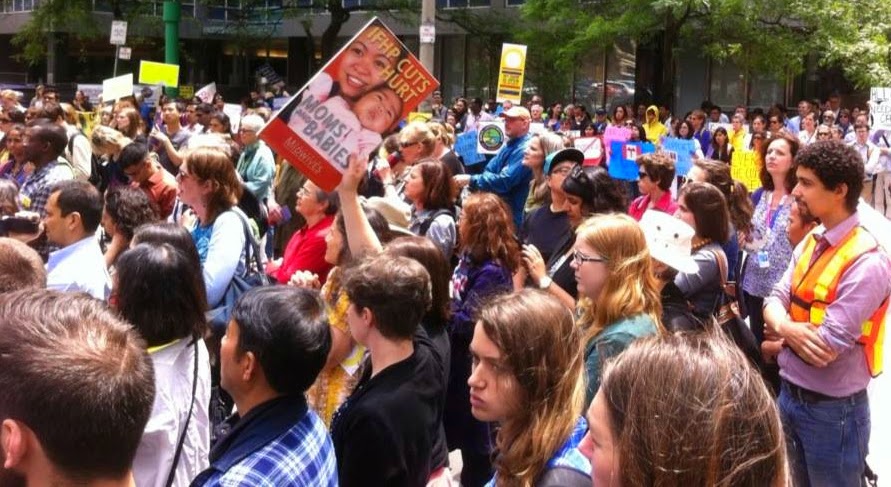 More than two years of mobilizing have pushed the Federal Court to reject the Conservatives’ cuts to refugee health. This should encourage further mobilizing to reverse the cuts and challenge the broader agenda.

In April 2012 then Immigration Minister Jason Kenney announced drastic cuts to the Interim Federal Health Program, beginning in June of that year. The government claimed that the cuts would promote fairness, save money and protect public health—but the cuts did the exact opposite.

Mobilizations
There was immediate condemnation by health providers—including an open letter, occupation, interruptions of Tory press conferences, and demonstrations across the country. These led the government to quietly reverse some of the cuts, but this only created more confusion.

Health providers warned that these cuts would harm refugees and scapegoat them for other healthcare cuts. As Dr. Mark Tyndall said at an Ottawa press conference in 2012, "the government has used this issue to divide Canadians, pitting those who are dissatisfied with their own health coverage against refugees. Canadians are smarter than this. This is an attack on our entire healthcare system."

A year after the cuts there were already dozens of documented cases of refugees being denied essential medical care. Canadian Doctors for Refugee Care and the Canadian Association of Refugee Lawyers launched a constitutional challenge, and there was a second annual day of action across the country against the cuts.

The mobilizations pushed some provinces to say they would step in and provide care—throwing the new Immigration Minister Chris Alexander into a temper tantrum about making Canada “a magnet for bogus asylum seekers.” But the reality of the cuts has continued to emerge. According to the study “The Cost and Impact of the Interim Federal Health Program Cuts on Child Refugees in Canada”: “After the implementation of funding cuts, the admission rate of refugee children increased from 6.4% to 12.0%...Shifts in the levels of health care access (hospital to primary-based care or vice-versa) due to affordability and administrative hurdles may make the vulnerable refugee population sicker, eventually leading to overall increase in healthcare costs.”

Court decision
This June was the third annual day of action against cuts to refugee health, and now the Federal Court has reflected public opinion. The ruling by Justice Anne Mactavish found that the cuts threaten the health and lives of refugees: "The 2012 modifications to the [Interim Federal Health Program] potentially jeopardize the health, the safety and indeed the very lives, of these innocent and vulnerable children in a manner that shocks the conscience and outrages Canadian standards of decency…I have found as a fact that lives are being put at risk."

Furthermore, the ruling rejects the bogus rhetoric used to justify the cuts: “It puts their lives at risk, and perpetuates the stereotypical view that they are cheats, that their refugee claims are ‘bogus,’ and that they have come to Canada to abuse the generosity of Canadians. It undermines their dignity and serves to perpetuate the disadvantage suffered by members of an admittedly vulnerable, poor and disadvantaged group."

Keep up the pressure
Anti-migrant racism is a key component of the Conservatives’ austerity agenda: exploiting migrant workers while blaming them for jobs losses, and cutting refugee health while blaming them for healthcare cuts. This scapegoating provides a cover for the Conservatives’ own agenda—from eliminating jobs at Canada Post to cutting $36 billion from healthcare.

The recent Federal Court ruling reflects more than two years of mobilizing, and shows how this can challenge the Conservatives’ cuts and their racist justifications. But the court decision does not restore healthcare: the government has four months to respond, and they are planning on appealing the decision. That the Conservatives have ignored 10 court decisions and two votes in Parliament in support of US Iraq War resisters shows us that this important decision on refugee health is not the end of the fight.

Continued mobilizations will be necessary to reverse the cuts, pressure provincial governments to follow their words and provide care in the meantime, and challenge the broader austerity agenda.
Posted by Dr. J at 4:00 PM