Today, "cog in the Conservative machine" Alykhan Velshi relaunched his website "ethical oil", with a series of ridiculous posters. Based on Ezra Levant's tar sands book by the same name, the posters take aim at "the world's bastards" (Iran, Venezuela, Saudi Arabia, and Sudan). As Velshi argues "When you’re filling up the tank, I think you’re indirectly funding them and their pet projects." The "ethical oil" argument counterposes "foreign oil" with Canada's tar sands--claiming that the latter promotes the environment, human rights, peace and democracy. Below are alternative posters to expose the myth of "ethical oil" and argue that a green economy free of the tar sands is the only viable future for the planet and its people. 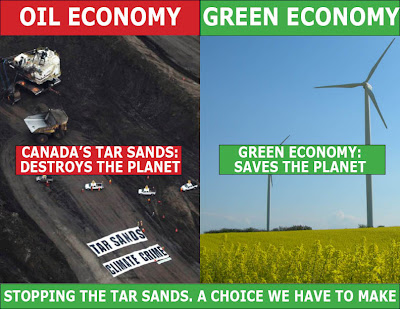 Counterposing tar sands oil with other oil is a false dichotomy. The oil economy in general is leading the world to catastrophic climate change, and the tar sands is accelerating this process. According to Greenpeace,


"The tar sands cover an area of land the size of England, which has been divided up and leased to the world’s biggest oil companies...The tar sands use more water every day than a city of two million people and consume enough natural gas to heat six million Canadian homes. Until the oil boom, the tar sands were too expensive to be economically viable. But our global addiction to oil has us scraping the bottom of the barrel. The tar sands generate 40 million tonnes of CO2 per year, more than all the cars in Canada combined...As the fastest growing source of greenhouse gas emissions in the country, the tar sands are the main reason Canada continues to block meaningful global climate regulations. The Canadian government ignores the warnings of the scientific community by aiming for abysmal targets that will leave us at nearly double the science-based target that we need to meet to keep the increase in global temperature below 2 C and avoid catastrophic climate change." 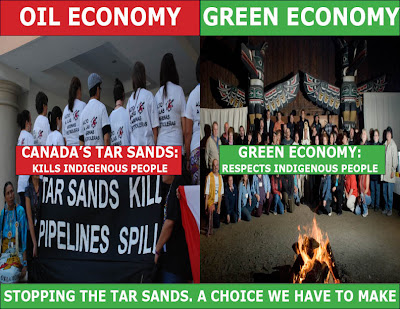 The claim that tar sands promotes indigenous rights has been exposed by indigenous people themselves, who are leading the fight against tar sands. According to the Indigenous Environmental Network, 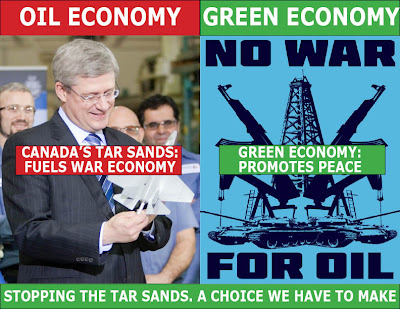 The actions of the Harper government make the false dichotomy of "conflict oil" vs "ethical oil" obvious. As opposition Harper wanted Canada to join the oil war in Iraq, and as Prime Minister has persecuted US Iraq War resisters (with Velshi an eager participant) for trying to be ethical soldiers refusing to fight for conflict oil. While promoting the tar sands, Harper has extended the oil war in Afghanistan three times, already once extended his oil war in Libya (where NATO intervention is designed to undermine the Arab spring that threatens to overthrow all the Western-backed "bastards"), and plans on wasting billions on oil-dependent fighter jets to participate in further conflicts over foreign oil. 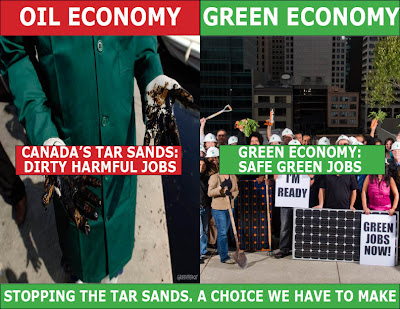 The claim that tar sands production supports worker's rights ignores the experience of workers themselves. Last year a tar sands workers was fired for blogging about the conditions at Fort McMurray:


"We have options for bagged lunches to take to work that includes stale vegetables that are sometimes unwashed (and occasionally are rotten/slimy), green fruit, sandwiches so high in salt it would terrify you, and a selection of donuts/cookies/cupcakes that would make Tim Horton's pale in comparison...All the vents are connected together so that if one person gets sick you are almost guaranteed to get it as well, the only answer is to stuff your vents with towels and live with stuffy stale air. It is not uncommon to have dozens of people ill, and there are occasional outbreaks of flu or cold that can affect hundreds at a time...There is no viable complaint procedure, no responsible person to notify of low quality or dangerous conditions, as camp patrons we are almost entirely helpless and at the whim of these people and they know it. This only reinforces the general resentment (or forced acceptance) of these conditions." 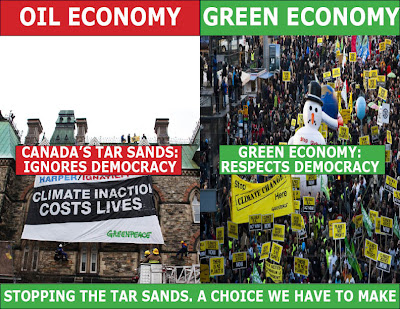 
"over 70 percent of Canadians support redirecting of military spending toward efforts that reduce greenhouse gas emissions, as well as the idea of a World Climate and Justice Tribunal to judge and penalize countries and corporations whose actions have contributed climate change. Over 80 percent of Canadians believe the Canadian government should invest in “green jobs” and transition programmes for workers and communities negatively affected by a shift off of fossil fuels."

Despite attempts to greenwash the tar sands, the majority of people support a truly green economy--and movements uniting indigenous groups, environmentalists, the labour movement and the anti-war movement are working to bring for this democratic and green future to life.
Posted by Dr. J at 8:47 PM 4 comments:

Myths and facts about the Muslim prayer space 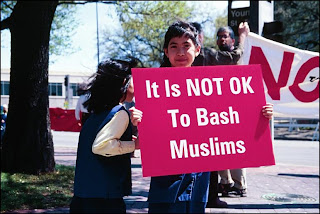 There’s growing hysteria against the prayer space for Muslim students at the Valley Park Middle School in Toronto. It’s claimed that it gives special treatment to Muslims, undermines public education and imposes sexism on society, and that we should support a supposedly broad-based multifaith coalition that opposes it. But this is based on a series of myths.

Email ThisBlogThis!Share to TwitterShare to FacebookShare to Pinterest
Labels: islamophobia

The bombs in Afghanistan have landed in Norway 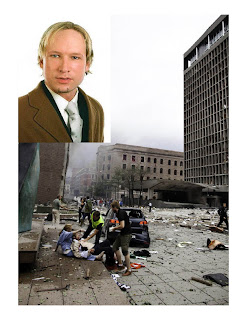 A decade of Islamophobia to justify the war in Afghanistan is now spreading violence to the West. Right-wing Islamophobe Anders Behring Breivik has killed 91 people in Norway, through the explosion of a bomb near the Prime Minister's building and a shooting spree in a youth camp organized by the Workers’ Youth League.

The initial response by international media was to blame Muslims. But when the alleged perpetrator turned out to be a blond-hair, blue-eyed Norwegian Christian nationalist, some are now denying there’s any context whatsoever for the killing. As a Norwegian official said, "It seems it's not Islamic-terror related. This seems like a madman's work."
But Breiviks was not driven by "madness", he was driven by right-wing Islamophobic politics. From 1997 to 2007 he was a member of the xenophobic "Progress Party". Since that time police chief Sveinung Sponheim describe his internet postings as having “some political traits directed toward the right, and anti-Muslim views”, and others have pointed out his an admirer of prominent anti-Muslim individuals and organizations like Geert Wilders and the English Defense League.
ISLAMOPHOBIA
Islamophobia existed well before the terror attacks of 9/11. After the Oklahoma City bombing of 1995 (orchestrated by Gulf War veteran and right-wing extremist Timothy McVeigh), the media blamed Muslims, and the American-Arab Anti-Discrimination Committee documented death threats against Muslims and vandalism of mosques. But for the past decade there has been a surge in Islamophobia to scapegoat populations at home and justify wars abroad.
The Western countries with Islamophobic policies overlaps with those occupying Afghanistan: from the US (which incarcerated Muslims without trial in Guantanamo Bay), to Canada (which has rounded up Muslim men and pressured them to admit to terrorism, while Muslim Canadians have been abandoned abroad, and media have amplified fringe-group campaigns against prayer spaces), to France (which is banning girls who wear hijab from school, and women who wear niqab from public space), to Norway.
The website Islamophobia-watch has documented anti-Muslim racism around the world, which in Norway includes:

-2006: the Directorate for Primary and Secondary Education of Norway banned girls and women wearing niqab form school
-2007: anti-immigration politicians in Bergen threatened to use pigs feet to chase praying Muslims out of a public square.
-2009: the Norwegian government tried to ban female police officers from wearing the hijab
-April 2011: attempts were made to set up a Norwegian Defense League—modeled on the English Defense League--with a demonstration was called against the “Islamic occupation of Noway”. While only 10-15 Islamophobes turned up, up to 1000 people attended a counter-demonstration
-May 2011: a school in Bergen had to be evacuated when a national newspaper received a message threatening “A massacre at Gimle school Bergen. Everyone that stands in the way will die, especially Muslims”

But police have refused to see Islamophobia as a threat. “It’s surprising, because the Norwegian police have long said that the right wing extremist community was under control,” said Hegghammer, of the Norwegian Defense Research Establishment.
FIGHT POVERTY, RACISM AND MILITARISM
As Martin Luther King famously said:

“The bombs in Vietnam explode at home. They destroy the hopes and possibilities for a decent America. If we reversed investments and gave the armed forces the anti-poverty budget, the generals could be forgiven if they walked off the battlefield in disgust. Poverty, urban problems and social progress generally are ignored when the guns of war become a national obsession.”

The horrific crimes of Anders Behring Breivik have exposed the consequences of war and Islamophobia, which are intensifying in the economic crisis. To counter this we must follow the words of King:

"Our only hope today lies in our ability to recapture the revolutionary spirit and go into a sometimes hostile world declaring eternal hostility to poverty, racism, and militarism."