5 lessons from the Quebec student strike 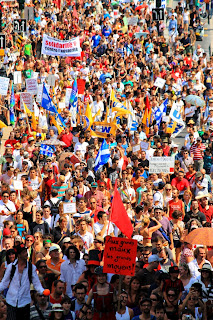 The historic Quebec student strike has generated a number of lessons we can all take forward in the fight against austerity.

1. We can beat austerity
Premier Charest tried to raise tuition 75% to further the neoliberal assault on education and provoke students—hoping to use the resulting polarization right-wing populism to win another election. Students were subject to media attacks, ridicule from the Premier, police violence, and the draconian Bill 78—revealing the extent to which the 1% will go to impose austerity.
Yet the student movement remained united, mobilized wider support and built a historic movement that played a key role in running Charest out of office, out of his own seat, and securing the promise of the incoming PQ to abolish the tuition hike and revoke Bill 78 (law 12). In the process hundreds of thousands of students were educated in a semester of resistance that will shape struggles to come and have inspired people across Canada and around the world. Who’s laughing now, Mr. Charest?

2. Resistance is a process not an event
Though the Quebec Spring appeared to come out of nowhere for people outside Quebec, it has been a long time coming. Quebec’s history of resistance to national oppression has contributed to making it the site of the largest social movements of the last decade—from the anti-globalization protests of 2001, the anti-war protests of 2003 (which stopped Canada from officially participation), the mass May Day protest of 2004, and the mass student strike of 2005. The last strike, the latest in a history of student strikes in Quebec, trained a generation of student activists and defeated the government’s $103 million cuts to education.
This collective experience in Quebec became intertwined with the 2011 year of revolt triggered by the Arab spring to produce the “printemps érable.” The 2012 strike drew on local and global to build a mass strike from the ground up, department by department and campus by campus—an experience that can’t be spontaneously summoned but must be patiently built if we want to spread the Quebec spring.

3. Politics matter
It was not simply the scale of the attacks—from the 75% tuition hike to Bill 78’s attack on civil liberties—that spontaneously produced mass resistance, or the existence of general assemblies in the abstract. The politics that dominated the assemblies built the movement in a way that was both broad and radical.
First, the movement was built in an inclusive way so as to mobilize the greatest amount of opposition. While many at the heart of the movement believe in free education, the strike was initiated on the simple demand of “stop the hike”, to mobilize the greatest unity on this primary demand—and the resulting mass participation allowed for people to radicalize. When Charest imposed Bill 78, the movement responded by appealing to all those affected to rally in defense of civil liberties. By doing so the student strike turned the tables on Charest and broadened the resistance—encouraging casserole demonstration by many who had previously not taken part in the protests.
At the same time, a simple basis of unity against tuition hike and Bill 78 were framed in a context against austerity that built alliances with other groups—from the April 22 earth day demonstration that linked the student movement with the environmental movement against Plan Nord, to the solidarity with the locked out workers in Alma. As a result the student movement became a broader social movement.

4. Left parties can amplify movements
The history of social movements in Quebec has given rise to the left alternative Québec solidaire, a “party of the ballot box and the streets”, whose one MNA Amir Khadir was able to be a megaphone for the movement—encouraging resistance Bill 78, and getting arrested while joining the protests.
The election was dominated by two opposite but reinforcing currents that squeezed QS: a "radical" abstentionism that counterposes the streets and the ballot box and dismisses the importance of QS—surrendering the electoral terrain to the right—and an “anyone but Charest” argument that bolsters the PQ. But the disillusionment with the PQ and Liberals meant that they both lost support, with a right-wing populism turning with the CAQ.
Despite these dominant currents, QS won two seats (with well known feminist Françoise David joining Amir Khadir), came in second in two others, and increased their percentage of the vote. Combined with the higher voter turnout, this represents an important increase in support for QS—a doubling of the vote from 2008. QS helped build the Quebec spring and was in turn shaped by it, with many students joining its ranks, and is in a stronger position to continue giving voice to the movements in the future.

5. La lutte continue
This has just been the first chapter of the printemps érable. The support for the PQ is shallow, there is anger at the Liberals and false hope in the CAQ, like the ADQ before it, and all will show their united support for neoliberalism. The movement will need to keep asserting itself in the streets, campuses, neighbourhoods and workplaces, amplified by QS--to ensure the PQ maintains its promise of revoking the hike and the law, and to push the movement forward.
Unfortunately NDP leader Thomas Mulcair told his MPs not to support the student strike and then announced the NDP will run provincially—against QS. But the rapid spread of casserole demonstrations across the country shows the growing solidarity with Quebec and a desire to fight austerity locally. We need to learn the lessons of the Quebec spring by building broad movements from below, and having left parties that amplify and not dampen movements.
Posted by Dr. J at 10:51 AM No comments:

Support the Riveras, stop the deportation of war resisters 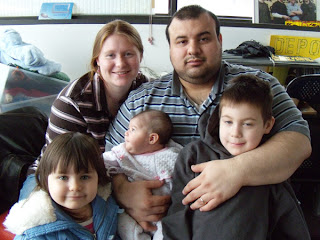 The Harper government is trying to deport US Iraq War resister Kimberly Rivera and her family September 20, the start of a renewed campaign against war resisters that undermines international law and Canadian democracy. But there is a campaign to support the Riveras and stop the deportations.

With massive demonstrations against the looming Iraq War in 2003, the Canadian government refused to participate—and Prime Minister Harper  admitted the war was “absolutely an error.” Recently Archbishop Desmond Tutu called for Bush and Blair to be tried for war crimes for a war that "has destabilized and polarized the world to a greater extent than any other conflict in history." 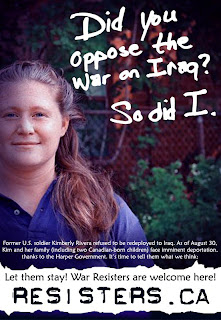 Under international law soldiers have the right to refuse participation in illegal conflicts such as Iraq, and the Nuremburg principles call on soldiers to refuse participation in such wars. During the Vietnam War, Canada welcomed US war resisters—both volunteers and conscripts—and resisters from the Iraq War have been coming to Canada since 2004. US veteran Kimberly Rivera left the Iraq War after experiencing the terrifying impact of the war on children. She came to Canada in 2007—becoming the first female US Iraq War resister—and lives in Toronto with her husband Mario and four children (Christian, Rebecca, Katie and Gabriel).

US Iraq War resisters have the support of the majority of Canadians—including human rights groups, student and labour unions, community and faith groups, environmentalists, authors and artists. This mass support has been reflected in two Parliamentary motions calling on the government to stop the deportations and to let war resisters stay.

Minister of Censorship and Deportation
Despite international law, Canadian tradition and democracy, and Harper's own statements against the Iraq War, the Harper government has deported war resisters to US prison—including Robin Long (who was separated from his family) and Cliff Cornell, who both received harsh jail sentences for speaking out against the war. According to Cliff’s lawyer, “because he spoke out against the Iraq war, Cliff's sentence is harsher than the punishment given to 94 percent of deserters who are not penalized but administratively discharged.” Threatened with a similar fate of being separated from his family and jailed for following his conscience and international law, resister Rodney Watson has been living in sanctuary since 2009.

Immigration Minister Jason Kenney, an early supporter of the Iraq War, has gone out of his way to try to deport war resisters. When the Rivera family was threatened with deportation in 2009, Kenney called war resisters “bogus refugee claimants.” This was not about supporting other refugees, as Kenney's cruel cuts to refugee health have since made clear. As the Canadian Council for Refugees wrote in an open letter: “It is highly inappropriate for you to express your opinions on how you believe IRB (Immigration and Refugee Board) members should make refugee determinations. To do so gives the strong appearance of political interference. Public comments such as yours only make IRB members’ jobs more difficult and threaten claimants’ rights to an unbiased decision…The Canadian Council for Refugees supports all war resisters from any country who refuse to engage in armed conflict that is contrary to international humanitarian law.”

Kenney dodged responsibility for his campaign against war resisters when questioned in public. Thankfully an emergency stay of removal was granted to the Riveras last time, and since 2008 there have been 10 federal court or federal court of appeal decisions in favour of war resisters.

Kenney has since amplified his intervention against war resisters by issuing Operational Bulletin 202, instructing immigration officials to flag US Iraq War resisters as “criminally inadmissible” (as opposed to criminal Conrad Black). In response, Amnesty International and Peter Showler (former Chair of Canada’s Immigration and Refugee Board) called on Kenney to rescind Operational Bulletin 202 because it “misstates the law and seeks to intrude on the independence of both IRB members and Immigration Officers.”

Now there is a renewed offensive against war resisters beginning with the Riveras, who—before even receiving the decision on their application to stay on humanitarian and compassionate grounds—were given a deportation date of September 20.

Support the Riveras, stop the deportation of war resisters
Last night's community meeting in Parkdale, where the Riveras and other war resisters live, spilled out into the streets as people marched to show their support for war resisters. We have two weeks to amplify the campaign to stop the September 20 deportation of Kimberly Rivera and her family, and to reaffirm that she was right--and so were we--to say no to the Iraq War.

*Contribute to the urgent appeal for funds.

*Friday September 14, 4:30-6pm will be a Canada-wide day of petitioning and leafletting. People in Toronto can meet at three locations: Carrot Common on Danforth ave, Trinity St. Paul Centre (427 Bloor St West, near Spadina), and Queen St. West and Dunn (Parkdale). Information from other cities will soon be available.

* Wednesday September 19, 4:30-6pm, there will be a peaceful demonstration outside the Federal Court Building at 180 Queen St. West, Toronto, to call on Kenney to stop the deportation of the Riveras.