On March 31, 8,000 people—including striking students, workers from across Quebec, and contingents from Toronto to South Africa—converged in Alma, Quebec to support locked-out workers.
On New Year’s Eve, Rio Tinto locked out 800 workers in Alma—a town of 30,000 people, three hours north of Quebec City. The mining giant wants to contract out jobs so it can impose a 50% wage cut. But Alma workers have launched a campaign that has gone global—from California workers who had a successful strike against Rio Tinto, BC workers who have pledged $60,000 of their own wages, and Toronto Steelworkers who in early march took a bus 12 hours to the picket lines (for video footage, go here). 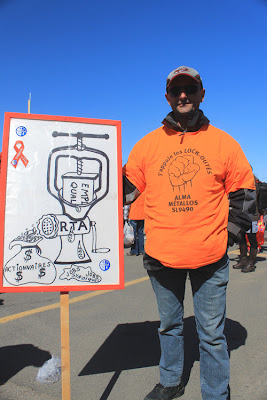 The solidarity for locked out workers is converging with the massive student strike. Alma workers have supported the Quebec student strike, and on March 31, students from Quebec (including the leadership of CLASSE, the group leading the group) joined the day of action in Alma. 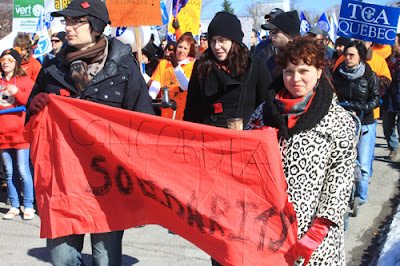 There were also contingents of trade unions from across Quebec, buses of steelworkers from Hamilton and Toronto, and workers from Kentucky, Los Angeles, Australia, New Zealand, Mexico, Turkey, the Netherlands, and South Africa. 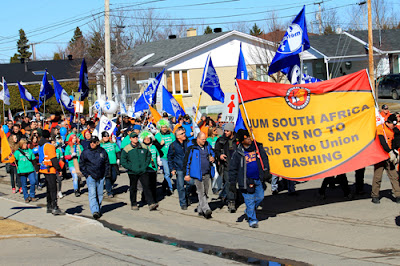 In the Arab Spring, the interaction between students and workers has been crucial: while students and youth groups were often the first in the streets in Tunisia and Egypt, it was mass strikes that finally drove out Ben Ali and Mubarak, and the revolutions have continued on campuses in workplaces with demonstrations, occupations and strikes. As Amir Khadir, one of the leaders of Quebec’s left-wing electoral party Québec solidaire, has explained in this video interview, Quebec’s “printemps érable” (which is translated as “maple spring” but in French sounds like “Arab spring”) includes both students and workers. The mass student strike is giving confidence to broader movements, from Earth Day protests on April 22 to the labour movement. In the last two weeks of March, Aveos workers blockaded a road in Montreal after being laid off, Air Canada workers went on solidarity wildcat strike in Montreal and Quebec City, and then the mass demonstration converged in Alma. 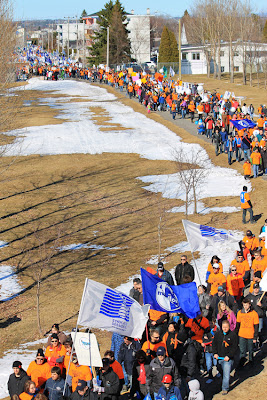 Canada’s 1% rules by dividing, including divisions across Canada and Quebec, but there is growing solidarity. For more information on the campaign, including video footage of the March 31 demonstration, go here. To hear a song one of the locked out workers wrote, go here. 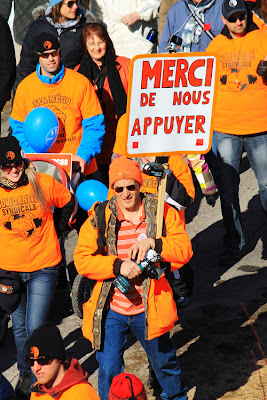