Beck, Ford and the limits of right-wing populism

This has been a bad week for right-wing populists: falling ratings forced Glenn Beck to leave his Fox News program, while 10,000 marched against the neoliberal policies of Toronto's mayor Rob Ford. Both are major shifts from just a few months ago, when Beck dominated American television while Rob Ford won a landslide election. Many people saw these as evidence that the political views of the majority had lunged to the right. But Beck and Ford illustrate the contradiction of right-wing populism, and the possibilities for change.
"LEFT" POLITICIANS AND THE ECONOMIC CRISIS
The economic crisis of 2008 hit almost 10 years after the anti-globalization/anti-capitalist movement of 1999, and 5 years after the massive anti-war protests of 2003. For years majority opinion has been against war and growing numbers critical of neoliberal policies. But the response of politicians across the political spectrum has been to continue the same policies--escalating war, bailing out banks and corporations, cutting public services and attacking wages and pensions.
While the anti-war and progressive movements in the US helped elect Barack Obama to the presidency, he escalated war (continuing the occupation of Iraq, sending more troops to Afghanistan and launching drone attacks on Pakistan), continued the Patriot Act and Guantanamo Bay, and gave $700 billion of public funds to corporations while ordinary Americans continued to face home forclosure and unemployment. Meanwhile Toronto's left-wing mayor David Miller--who the labour and other progressive movements had helped elect in 2003--decided in 2009 to balance the books on city workers, blaming them for the recession and demanding concessions.
RIGHT-WING POPULISM FILLS THE VOID
Glenn Beck, the Tea Party and Rob Ford are right-wing populists, whose appeal grows from people’s frustration with the economic crisis combined with the inability of the left in office to articulate a progressive response or support fightbacks when they emerge. As a result people's legitimate frustrations get deflected onto immigrants or unions instead of the corporations who created the crisis. Obama’s continuation of Bush policies undermined progressive movements that had elected him and opened up space for Glenn Beck and the Tea Party movement--which provide reactionary outlets for people's economic hardships, but fail to improve people's lives. As Gary Younge explained:

"When Tea Party supporters talk about 'taking our country back', they are – in part – expressing nostalgia. They literally want to take it backwards to a past when people had job security, and a couple on a middle-class wage could reasonably expect their children to have a better life than their own. The party they have been voting for and the candidates they are supporting now have actively and openly worked to undermine those aspirations. Their frustration at the Democrats' inability to deliver on their promises should be eclipsed only by their fear that the Republicans do manage to deliver on theirs. No wonder they are so angry. They keep treading on their own toes."

Meanwhile the people of Toronto organized two massive movements against austerity--24,000 city workers on strike in June 2009, and 40,000 people marching against the G20 in June 2010--but the left in office turned their back on this mood, so right-wing populism filled the void. Despite having a “left” mayor in office during the 2009 strike, Toronto city workers ironically had less support from council than when they struck against right-winger Mel Lastman (when progressive councilor supported the strike), while council voted themselves a pay raise. Without a progressive response to this hypocrisy, Ford captured people’s anger with a right-wing response--attacking both workers and city council salaries. The silence of the left city councillors opened the floodgates for Ford’s right-wing backlash, which spilled over from city workers to transit workers, and now garbage collection and social housing.
Mass resistance against the G20 austerity measures and the $1 billion “security” enforcing it provided an opportunity for the left council to recover and reunite with progressives. But after the largest mass arrest in Canadian history, city council passed a unanimous motion to “commend the outstanding work” of the police. Facing no progressive response, Ford could carve out an even more reactionary position, arguing the police were too restrained in their brutality and that there should be no inquiry.
BUILDING ALTERNATIVES
But movements that challenge austerity are providing an alternative to right-wing populism. While Beck and the resources of Fox news marshalled less than 100,000 people to Washington in August 2010, left-wing comedians Stephen Colbert and John Stewart got double that number a few months later--showing the scale of people's frustration with right-wing divisive politics. Much more significant in terms of the grassroots groups and the issues they raised, was the "One Nation Working Together for Jobs and Justice" on October 2, 2010. Though ignored by the mainstream media, Democracy Now reported that 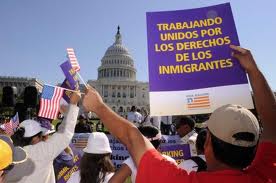 "More than 400 groups, including labor unions, as well as civil rights, gay rights, and environmental groups, endorsed the 'One Nation Working Together' rally. Organizers said the gathering drew a crowd of 175,000 people. The focus of the day was jobs, justice and education for all. The rally’s sponsors said they also hoped to demonstrate that they, not the tea party, represented the nation’s majority."

The rally was a prelude for developments this year. If people took Glenn Beck and Fox News to represent American opinion they might think that Wisconsin governor Scott Walker could easily get away with union busting as part of a resurgent right-wing. But the explosive resistance in Wisconsin has provided a left-wing response to the crisis and inspired the nation. The April 4 Days of Action featured 1,200 events across the US in solidarity with Wisconsin workers for "the freedom to bargain, to vote, to afford a college education and justice for all workers, immigrant and native-born."
Meanwhile Rob Ford is encountering growing resistance within months of taking office. On his inauguration on a cold December day, 150 people protested. On his first council meeting, a temper tantrum about "left-wing pinkos" by his invited guest Don Cherry sparked protest by councillors, while thousands of people across the city got "left-wing pinko" buttons that they continue to wear with pride. In March organizers of International Women's Day confronted Rob Ford about his cuts to public services, and that weekend thousands marched for public services and jobs. Shortly after it was revealed that Ford has given a cheat-sheet to his supportive councillors, instructing them how to vote. This is a sign of weakness. According to councillor Joe Mihevc,


"The Fords talk about running the place like a business but it’s been more like a military. My kids would call them control freaks. The risk is that people get tired of being told what to do. And I can tell you, there are a few who admit they’re having trouble sleeping at night. This isn’t what they were elected to do."

While the mayor wants to build "Ford Nation" as a replica of the Tea Party, the labour movement can tip the balance in favour of progressive activism.  On April 9 unions joined with student and community groups to bring 10,000 people into the streets of Toronto, transforming Ford's motto "respect for taxpayers" into "respect for communities, public services and good jobs". Like the labour fightbacks in the 1930s--a few years after the 1929 Wallstreet crash--resistance to the Great Recession is a process, not an event. On January 29, 10,000 striking workers and their allies across the province marched against concessions by US Steel. While some on the left dismissed the mobilization, it built unity and confidence for workers to stand up against austerity, and along with the inspiration from Egypt and Wisconsin helped motivate people to protest April 9. This mobilization in turn has raised people's horizons to the mood for a fightback, providing confidence for local campaigns and giving momentum for the May 1 rally on Parliament hill, on the eve of the federal election, which will help challenge austerity from whichever government tries to impose it. 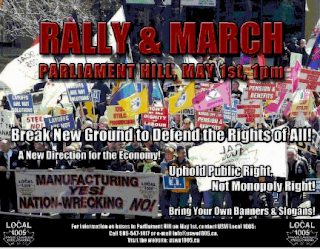 Posted by Jesse McLaren at 1:55 PM