"Female viagra" and the medicalization of women

The pharmaceutical giant Boehringer Ingelheim has dropped its plan to market its failed antidepressant as a “female viagra” pill. The US Food and Drug Administration slammed the drug studies for failing to produce benefits, while 15% of women dropped out of the study due to side effects like depression, fainting and fatigue. “Female sexual dysfunction” is the latest pharmaceutical attempt to pathologize women, while real healthcare needs go unmet.


"FEMALE VIAGRA"
According to a recent Globe&Mail article: 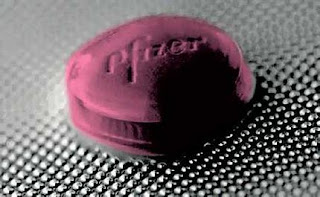 “Female sexual dysfunction” – a much-debated term that includes lack of desire and inability to reach orgasm – was entrenched when a 1999 article in the Journal of the American Medical Association announced that 43 per cent of women suffer from some form of sexual dysfunction. Problematically, the lead author was revealed to have financial ties to Pfizer.”

Marketing this drug as a “female Viagra” is also problematic: Viagra is to achieve a physical erection, while these pills for women are trying to alter their brain chemistry to promote desire they are told is insufficient.  This does not mean taking a nihilistic attitude towards medicine but to acknowledge the impact of profit-driven pharmaceutical companies (for more on this check out the documentary Orgasm Inc.). As Ray Moynihan, co-author of Sex, Lies and Pharmaceuticals: How Drug Companies Plan to Profit from Female Sexual Dysfunction explained in the article above:


“There would be a cohort of women with nerve damage after surgery, or sexual side effects of SSRIs, for which a health professional could be extremely helpful. But to categorize the changes in desire that happen as we move through our lives and relationships as symptoms of a disorder or a dysfunction is highly controversial and questionable. I’m not sure that women going through absolutely normal changes in desire want to identify themselves as suffering from some medical disorder.” 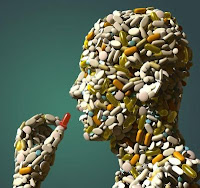 WEAPONS OF MASS PRESCRIPTION
Like all industries, the pharmaceutical industry is made up of rival firms in competition for market share. In the field of health this produces an inevitable pressure to pathologize. Men now face the prospect of getting treated for “andropause” (age-related decline in testosterone), “obesity” has gone from a risk factor to its own disease requiring pharmaceutical intervention (more on this in a future post), while the notion of “pre-hypertension” is pushing blood pressure medicine on people with normal blood pressure.
Women have faced a long history of diseases created to pathologize and control their bodies. For centuries women were diagnosed as suffering from “hysteria”—a catch-all term uniquely imposed on women, based on the idea that their uterus (“hyster” in latin) was out of control. As one blogger has summarized: 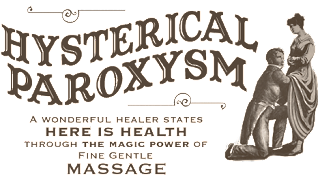 “Treatment” varied from incarceration in asylums (more on the history of psychiatry in a later post), surgical removal of the clitoris, or forced orgasm.
In the 20th century the medical establishment dropped “hysteria”, but  went on to universally medicate older women with Hormone Replacement Therapy (HRT) on the grounds that menopause was a disorder. Pressure from women’s groups helped expose the bad science behind this, culminating in the Women’s Health Initiative showing that indiscriminate use of HRT can lead to breast cancer, heart disease, strokes, and pulmonary emboli.
Then along came “Pre-Menstrual Dysphoric disorder”. When the patent for the anti-depressant Prozac was about to expire, Eli Lilly got a new patent for it, under a different name, for the treatment of this new “disorder”. According to feminist psychoogist Paul Caplan, "It's a label that can be used by a sexist society that wants to believe that many women go crazy once a month...Any normal hormonal change in people of either sex can exacerbate migraines, thyroid problems, etc., but no one suggests calling men's hormonal changes kinds of mental illness".  Now, with "female seual dysfunction", BigPharma has pathologized women’s sexual lives in order to further push their products.

WOMEN’S HEALTH
This does not mean dismissing the role of medicine in women’s health, but basing it on women’s needs not pharmaceutical profits. Ironically, the creation of false medical needs runs in parallel with the denial of real needs such as abortion or HIV prevention. 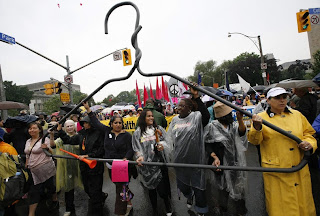 An alliance between the women’s movement and the progressive medical community struck down laws against abortion, and continues to fight for access--from promoting more teaching about abortion in med schools, to challenging Canada's minority government that wants to deny abortion rights to the 70,000 women around the world who die from unsafe abortion every year. The women's movement was at the forefront of the G20 protests, exposing Harper's war on choice and leading the 40,000 strong march with a giant coat-hanger.
Women also continue to fight for recognition and prevention of HIV. When AIDS was first discovered it was blamed on gays and Haitians and the impact on women was ignored, resulting in many women being excluded from receiving medicine, services, and disability benefits. Women demonstrated with the slogan “women don’t get AIDS, they only die from it,” demanding the definition include conditions specific to women (like invasive cervical cancer). This succeeded in 1993 and uncovered the true statistics, as the number of women with the diagnosis of AIDS tripled. But HIV continues to be blamed on gay men and promiscuity, for which the main prevention is condoms. In 1991 a group of women working on AIDS prevention in Haiti published a text countering myths about women and AIDS, a list that needs repeating almost 20 years later:


-“AIDS is a disease of men”: the data are overwhelming: AIDS was never a disease of men. Given transmission dynamics, AIDS may in fact becoe a disease predominantly afflicting women
-“Heterosexual AIDS won’t happen": Heterosexual AIDS has already happened. Indeed, in many parts of the world, AIDS is the leading cause of death among young women.
-“women’s promiscuity causes AIDS” : most women with AIDS do not have multiple sexual partners, they have never used IV drugs, they have not received tainted blood transfusions. Their major ‘risk factor’ is being poor. For others, the risk is being married and unable to control not only their husbands but also what jobs their husbands have to perform to make a living.
-“women are AIDS vectors”: ‘women are too often perceived as agents of transmission who infect men and ‘innocent babies’. Prostitutes have been particularly hard hit by such propaganda, but prostitutes are far more vulnerable to infection that to infecting; AIDS is an ‘occupational risk’ of commercial sex work, especially in setting in which sex workers cannot safely demand their clients use condoms.’
- “condoms are panacea”: gender inequality calls into question the utility of condoms in setting in which women’s ability to insist on ‘safe sex’ is undermined by a host of less easily confronted forces. Furthermore, many HIV-positive women choose to conceive children, which means that barrier methods that prevent conception are not the answer for many. Woman-controlled viricidal preventive strategies are necessary, if women’s wishes are to be respected.

To overcome the disconnect between multibillion dollar companies medicating women for manufactured diseases while millions of women are denied basic healthcare needs, healthcare needs to base itself on the needs of people not profit. Our bodies, our choice.
Posted by Dr. J at 1:40 PM