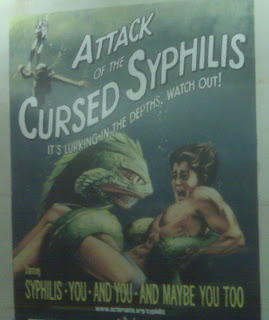 The US administration has apologized for intentionally infecting Guatemalans with syphilis. That’s right, from 1946 to 1948 American scientists intentionally infected 700 people in Guatemala—prisoners, soldiers, and psychiatric patients—with the infectious disease syphilis, in order to study the impact of penicillin. These days syphilis is blamed on people's "risky sexual behaviour"--especially men who have sex with men--so this story is an opportunity to review the history of syphilis scapegoats (and for links to other US human experiments, check out the recent entry from this wonderful blog).

SEXISM, RACISM
In 1918, rather than divert military spending to jobs and healthcare, US President Wilson funded the creation of detention centres, some surrounded by barbed wire and guards, for the forced quarantine of tens of thousands of women convicted of prostitution. As one government official explained (and if you want to read an excellent history of this read this source of this link, Alan Brandt's No Magic Bullet: a social history of venereal disease in the United States):


“The prevention of society against moral and social murder committed by the prostitute are functions in part of the detention house and reformatory. These functions are inextricable related to the control of the dissemination of gonorrhea and syphilis through promiscuous prostitution.” 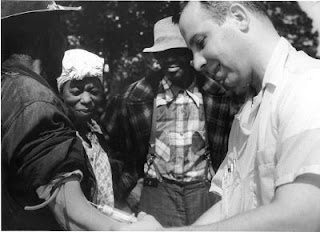 African-Americans were also accused of spreading syphilis through promiscuity. Whereas the prison system treated poor women like criminals, the medical system treated poor blacks like guinea pigs. From 1932 to 1972, the Tuskegee syphilis experiment deliberately gave fake medicine to 400 poor black men in Alabama who had syphilis, in order to study the long term and lethal health effects of the untreated disease—which destroys the cardiac and nervous systems. Then men were told they were getting free healthcare for their “bad blood”, and were promised free money for burials if they consented to autopsy after dying.

HOMOPHOBIA
The scapegoat for syphilis has shifted from women, to people of colour, and now to gay men. In 2003, Vancouver’s poorest neighbourhood was struck by one of the world’s largest outbreaks of syphilis. But instead of blaming poverty and healthcare cutbacks, the response was to blame gay men. A spokesperson for the BC Centre for Disease Control claimed that “we know it spreads very quickly in the gay community. Almost every other outbreak in the world is confined to that community”. Health Canada has issued similar homophobic and medically false statements, claiming that


“risky sexual behaviour among MSM (men who have sex with men) and other populations is a risking global trend. One reflection of this is the numerous outbreaks of infectious syphilis seen worldwide. In 1995, the World Health Organization (WHO) estimated that there were 12.2 million new cases of syphilis”.

Mainstream medicine continues to view gay sex as inherently dangerous, leading to bans on blood donations from men who have sex with men (see my post on this issue), and ridiculous statements that syphilis is only spread by gay men. The actual WHO stats show that of 12.2 million new cases, 11 million are in the global south, and a majority are women. By blaming gay men of spreading syphilis, these statements ignore conditions of poverty and inequality that put both men and women at risk of syphilis. All the homophobic hysteria about “risky sexual behaviour” is redefining a broad public health concern as a behavioural problem of a minority group. Blaming syphilis on “risky sexual behaviour” is like blaming cholera on risky drinking behaviour or blaming tuberculosis on “risky breathing behaviour” and asking people to reduce their number of conversation partners. Living in poverty and not having access to healthcare or clean water isn’t an individual behaviour, it’s collective condition imposed on millions of people.

GLOBAL TUSKEGEE EXPERIMENT
Millions die every year of infectious disease, not because of their individual behaviour but because they are kept in poverty and denied lifesaving medicine. Tuberculosis infects a third of humanity and remains a leading infectious causes of death 50 years after the discovery of curative treatment. Treatment also exists for malaria but lack of access to it is leading to widespread deaths. And HIV now infects 40 million people and is causing a reversal of life expectancy in countries where anti-retrovirals are not available. As a result we have a global Tuskegee experiment (for a great book on this topic, read this source, Paul Farmer's Infections and Inequalities), as six million people die every year from these three epidemics not because medicine doesn’t exist but because it is denied.
The same governments that have given billions of dollars to banks, corporations, and the military have just intentionally underfunded the Global Fund for HIV, TB, and malaria. As Medecins Sans Frontieres announced last week, “Major donor countries have chosen to undercut the main international funding mechanism to save the lives of millions of people at risk of dying from AIDS, TB, and malaria.” The Global Fund required $20 billion to expand programmes, including $13 billion just to maintain the program, but have received only $11.7 billion. Canadian Prime Minister Stephen Harper recently promised $18 billion for fighter jets, which could cover the $8 billion Global Fund shortfall twice over, or which could almost cover the entire Global Fund needs. But as MSF’s Dr. Jennifer Cohn declared, “world leaders have officially under-financed the Global Fund. This decision will result in the death of millions of people from otherwise treatable diseases.”
This is the true risky behaviour that threatens public health, not diverse and healthy sexual expression but the deliberate maintenance of conditions that spread infections coupled with the deliberate denial of medicine to treat them.
Posted by Dr. J at 12:01 PM