On Harper's hatred for the troops, and the medicalization of trauma

Despite admitting the Iraq War was “absolutely an error”, Canadian Prime Minister Stephen Harper once again refused to support the troops who came to the same conclusion. With the help of so-called opposition leader Michael Ignatieff, Harper defeated Bill C-440 that would have allowed US Iraq war resisters to apply for permanent residency in Canada. Fortunately the vast majority of the opposition voted for Bill C-440 (more than the number who voted for non-binding motions), and a majority of Canadians continue to oppose the Iraq War and support war resisters, so the fight is far from over. 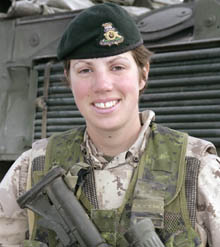 Harper cloaks his opposition to war resisters on the grounds that he supports Canadian troops in Afghanistan, but this argument is starting to crack. The mother of the first female Canadian soldier killed in Afghanistan, Nichola Goddard, went public with her doubts about the war. And her father agrees with the anti-war majority that the mission should not be extended. This has put the military and their slavish media into overdrive, claiming military families are pressuring Harper to extend the mission in Afghanistan. As if spending $18 billion on fighter jets last month did not reveal his true intentions. But Harper knows a majority of Canadians oppose the war, so instead he has to hide his intentions to extend the occupation behind grieving families whose kids he sent to die. Real brave.
If Harper supports the troops so much, why did he dismiss Veterans’ Ombudsman retired colonel Pat Stogran for blowing the whistle on the government’s treatment of veterans? Stogran told a news conference that “I was told by a senior Treasury Board analyst that it is in the government’s best interest to have soldiers killed rather than wounded because the liability is shorter term.”

MEDICALIZATION OF TRAUMA
This is not new. After the Vietnam War it took 10 years—under pressure from the Vietnam Veterans Against the War—for the Veterans Administration to acknowledge that more than 500,000 veterans had psychological disabilities. But though the government and medical establishment were finally forced to acknowledge psychological disability, it became sanitized through medicalization: Post-traumatic stress disorder.
Firstly, the label itself implies it is pathologically wrong to be horrified by war and to develop psychological impairment by being forced to fight. The sheer scale of those affected also challenges the notion that this is a “disorder”. Rather, the collective experience of hundreds of thousands of ordinary kids, traumatized by being used as the tool for imperialism, have had their experiences individualized, pathologized, and reduced to a medical acronym. But simply objecting to the pathologizing of disability can detract from the struggle for rights and access to services. Inventing PTSD has not only allowed the state to transfer ideological blame for the war, but also to evade the financial responsibility of providing veterans with disabilities with the services they need. As the bitter sarcasm of the late and great US comedian George Carlin illustrates, a main function of the concept of PTSD has been to deny disability:


"There’s a condition in combat. Most people know about it. It’s when a fighting person’s nervous system has been stressed to its absolute peak and maximum. Can’t take any more input. The nervous system has either snapped or is about to snap. In the first World War, that condition was called shell shock. Simple, honest, direct language. Two syllables, shell shock. Almost sounds like the guns themselves…Then a whole generation went by and the second world war came along and very same combat condition was called battle fatigue. Four syllables now. Takes a little longer to say. Doesn’t seem to hurt as much. Fatigue is a nicer word than shock. Shell shock! Battle fatigue. Then we had the war in Korea, 1950. Madison avenue was riding high by that time, and the very same combat condition was called operational exhaustion. Hey, were up to eight syllables now! And the humanity has been squeezed completely out of the phrase. It’s totally sterile now. Operational exhaustion. Sounds like something that might happen to your car. Then of course, came the war in Viet Nam…and thanks to the lies and deceits surrounding that war, I guess it’s no surprise that the very same condition was called post-traumatic stress disorder. Still eight syllables, but we’ve added a hyphen! And the pain is completely buried under jargon. Post-traumatic stress disorder. I’ll bet you if we’d of still been calling it shell shock, some of those Viet Nam veterans might have gotten the attention they needed at the time." 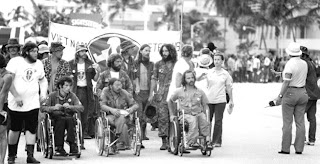 VETERAN RESISTANCE
Wounded soldiers who return not only demand compensation, but might also start questioning the war. It was his experience of the military hospital back home that led Vietnam vet Ron Kovic to question the war. In his powerful memoir Born on the Fourth of July, he described how languishing in an understaffed and under-funded veterans hospital led him to question the priorities of the government that sent him to fight:


"The wards are filthy. The men in my room throw their breadcrumbs under the radiator to keep the rats from chewing on our numb legs during the nights … The sheets are never changed enough and many of the men stink from not being properly bathed. It never makes any sense to us how the government can keep asking money for weapons and leave us lying in our own filth…I still tell people, whoever asks me, that I believe in the war. But more and more what I tell them and what I am feeling are becoming two different things. The hospital is like the whole war all over again."

When the experience of wounded vets connected with the broader peace movement, the results were explosive. Kovic described the mass anti-war march on Washington when his radicalization crystallized:


“I was never going to be the same. The demonstration had stirred something in my mind that would be there from now on. It was so very different from book camp and fighting. There was a togetherness, just as there had been in Vietnam, but it was a togetherness of a different kind of people and for a much different reason. In the war we were killing and maiming people. In Washington on that Saturday afternoon in May we were trying to heal them and set them free.”

The resulting mass movement dealt the US its most serious defeat in Vietnam, making it reluctant to send its troops to combat for a generation, and gave Canada 50,000 vets and their families, many who continue to fight for progressive causes. Bush tried to quash the “Vietnam syndrome” once and for all with Iraq, and Harper is trying to purge the legacy of the “draft dodgers”. Despite the defeat of Bill C-440, the movement to win refuge for war resisters continues. Join Ron Kovic and demand we support these troops: let them stay.
Posted by Jesse McLaren at 4:18 PM