Under the pressure of community and labour organizing, those responsible for the deaths of four migrant workers last Christmas Eve have been criminally charged. This victory highlights the dangerous conditions of migrant workers, and workers in general. 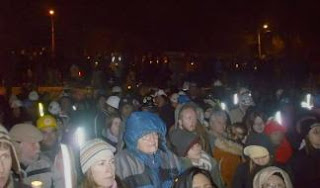 Last Christmas Eve, four migrant workers—Fayzullo Fazilov, 31, of Uzbekistan; Aleksey Blumberg, 33, of Ukraine; Alexander Bondorev, 25, of Latvia; and Vladimir Korostin, 40, of Uzbekistan fell to their deaths from a 13 floor scaffold in Toronto. Dilshod Marupova, 21, of Uzbekistan, survived the fall with broken legs and spine. At the time, there was a large emergency vigil, organized by Justice for Migrant Workers and No One Is Illegal, and including representatives from the Ontario Federation of Labour (OFL), Unite Here, the United Food and Commercial Workers, and the Canadian Auto Workers. The campaign  has continued with the OFL’s “kill a worker, go to jail” campaign. Now, those responsible—directors and project managers for Metron Construction Corporation—have been charged with criminal negligence causing death and criminal negligence causing bodily harm, the harshest charge for workplace deaths in Ontario’s history, which carries a possible life sentence.
Bill C-45—the Criminal Code provision that allows criminal charges to be laid if a company causes death or serious harm due to negligence—is the result of a campaign by the United Steelworkers in the wake of a Nova Scotia mine explosion that killed 26 miners in 1992. The provision has existed for six years but has been gathering dust, despite widespread accidents and deaths. OLF President Sid Ryan has decried the "carnage in the workplace" and noted that noted that, "Since this piece of legislation has been enacted, we've had 300,000 accidents a year in the workplace, which is about 1.8 million accidents reported and over 240 deaths in the workplace - and not one charge has been laid until today.”

MIGRANT WORKERS
This is partly the result of racism. Migrant workers bear the brunt of workplace accidents, as they don’t have the security to demand a safe workplace. As Jessica Ponting, a community legal worker with the Industrial Accident Victims Group of Ontario, pointed out at the emergency vigil, “Employers and recruiters pressure workers to give up rights to compensation under threat of job loss and deportation". Just three weeks ago another two migrant workers, working on a farm near Owen Sounds, died from exposure to toxic fumes. Stephen Colbert has helped raise awareness in the US about the plight of migrant workers, and concluded his congressional testimonry in a rare moment out of character: "migrant workers suffer, and have no rights".

SYSTEMIC VIOLENCE
The experience of migrant workers and the statistics of workplace accidents/deaths also point to the systemic violence in general of work under capitalism. I certainly witness the carnage of the workplace every day at work. At my rotation in plastic surgery/burn unit during med school I was struck by how many patients were workers injured on the job—cooks scalded with oil, electrical workers electrocuted, construction workers with finger amputations. Then at my trauma rotation in residency I noticed that the biggest groups of patients were not from inter-personal violence, but car accidents (more on this type of systemic violence in a later post), and workplace accidents. I remember seeing a couple of patients who fell from scaffolds working the graveyard shift—one who broke both arms and many facial bones, another who died of a massive brain injury. I continue to suture and splint injured workers on a daily basis.
Are all these merely accidents, if workers are forced to perform these dangerous duties to make a living? In his pioneering work on the social determinants of health, Friederich Engels broadened the notion of murder:


“When one individual inflicts bodily injury upon another such injury that death results, we call the deed manslaughter; when the assailant knew in advance that the injury would be fatal, we call his deed murder. But when society places hundreds of proletarians in such a position that they inevitably meet a too early and an unnatural death, one which is quite as much a death by violence as that by the sword or bullet; when it deprives thousands of the necessaries of life, places them under conditions in which they cannot live – forces them, through the strong arm of the law, to remain in such conditions until that death ensues which is the inevitable consequence – knows that these thousands of victims must perish, and yet permits these conditions to remain, its deed is murder just as surely as the deed of the single individual.”

The recent charges, won through community and labour campaigns, expose these daily crimes and the necessity of working towards a world where people don't die to make a living.
Posted by Dr. J at 7:08 PM